A Hat in Time Wiki
Register
Don't have an account?
Sign In
Advertisement
in: Time Rifts, Items

Time Rifts are tears in reality found throughout A Hat in Time which appear around broken Time Pieces. They act as a non-sequitur segment separate from the levels they are found in, where they can be entered by touching a Time Rift that appears as a floating glowing orb.

Each Time Rift is found across the various Chapters of A Hat in Time, with fixed locations shown by pictures when they appear on that chapter's map. As well as a unique location for each rift, every single Time Rift also has its own unique layout, as well as a dream-based visual design depending on which type the rift is.

Blue Time Rifts, otherwise known as the Water Time Rift or Dream World is a type of Time Rift that takes place in a strange place with brightly colored blocks, wedges, and other various objects suspended in an abyss, surrounded by several large clock tower-like structures in the distance. These rifts appears to be underwater, with bubbles that float passively and even a whale swimming through the upper part of the level at times, though Hat Kid jumps and falls through it like air.

Objects are arranged in such a way as to provide a path for Hat Kid to traverse, using all the platforming skills she has honed. Along the way, lanterns mark checkpoints. At the end of the path lies a Time Piece, which ends the level.

When falling or dying, the Hat Kid teleports to the last Checkpoint. They can be entered by touching a Blue Time Rift, floating glowing orbs, found in previously played acts.The parkour itself can be pretty challenging, but just a little harder than usual levels they are found in.

Purple Time Rifts, or Story Time Rifts are the second major type of Time Rift, created by landing on an Enemy or Character and having their thoughts and dreams permeate and develop the layout of the following rifts. Due to this, each Purple Time Rift is visually distinct from one another, sharing many design cues from the chapter they are tied to.

Unlike the more fragmented Blue Time Rifts, Purple Time Rifts seem to be far more cohesion in terms of layout. They are also comprised of many levels instead of just getting to the end of a single segment, requiring Hat Kid to enter a pipe to progress to the next level, before completing the level by breaking open an attack-able Time Rift ball and collecting its Time Piece.

Scattered throughout each level of these rifts except for certain exceptions are Rift Pons, a type of Pon which is tallied at the bottom of the screen separate from normal pons. They are used as a currency of sorts to unlock the next pipe to progress deeper into the rift. Frequently, there are more Pons to collect than needed, allowing a rushing player to collect the bare minimum in order to progress more quickly, or allowing a more diligent player to do less work in the later levels and spend their saved up Rift Pons to just progress past a notably difficult portion.

Alongside Rift Pons is Storybook Pages, an optional collectible which are hidden throughout the various levels of Purple Time Rifts. They serve to fill in some of the backstory of certain characters, locations and events prior to Hat Kid's arrival.

Death Wish Time Rifts, or Community Time Rifts are a subgroup of Time Rifts introduced with the Seal the Deal DLC as a series of three Death Wish stamps found after several of the difficult challenges. They act functionally as Purple Time Rifts, with Rift Pons and Storybook Pages to boot, with only their manner of unlocking being the major difference between them and the common Purple Time Rift.

Each of these time rifts come from the A Hat in Time community, which were then put into the game and credited their original makers in their stamp and mission description. 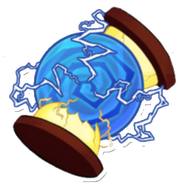