Tim, is a scrapped character in A Hat in Time who would aid Hat Kid in her quest to repair time. He's described as somewhat eccentric, and is also the CEO of Time. In the early Kickstarter images, Tim was seen to be a tutorial character, along with his imaginary friend, Tim's Friend, teaching Hat Kid on her journey.

“☀Here's Tim the Time Lord, and this is his story!

When Tim was promoted to ultimate Time Lord of the universe, the previous Time Lord told him before walking out the door: “Just don’t have a meltdown, OK?” From that day forward, Tim would remind himself daily to never have a meltdown. The consequences would be dire if there were no law and order in the universe. He put up a poster in his office to remind himself never to have a meltdown. He would make it appear on his phone every time he used it. He whispered it to himself before he went to sleep. It was only a matter of time before he had a meltdown. His attempts to prevent it, caused it. Now there is no law and order in the universe, and it’s slowly falling apart, one piece at a time.

Hat Kid collects these pieces in A Hat in Time, but she's not the only one!”

Tim only appeared in the prototype build of the game and is nowhere to be found in the Alpha, Beta, or Final versions.

In the prototype, he was used to bridge what eventually became Welcome to Mafia Town and Barrel Battle.

In the Final Build, he became a frozen victim of Queen Vanessa located in the corner of the second floor bathroom, except missing his necklace.

Tim's role remained pretty consistent throughout the game's development. However, what exactly he did was changed several times.

Before the Prototype, there was a scene that was only seen in trailers. According to William T. Nicholls, the lead 3D Artist, the scene would have featured a Mafia Goon capturing Hat Kid in the basement of Mafia Town's Seaside Spaghetti. Time would freeze, turning the surrounding area monochrome, the Mafia Goon would turn into a cardboard cutout, and Tim and Tim's Friend would give Hat Kid her choice of weapon, all of which would just result in the umbrella. Upon attacking the cardboard cutout, the Mafia Goon would return to normal, and killing him resumed time. This would result in the silhouette of Mustache Girl to appear in a nearby window and ask Hat Kid if she wanted to take down more Mafia.

In the Prototype, just as Hat Kid's about to grab her umbrella, Tim swoops in and picks both her and the umbrella up. After accidentally dropping Hat Kid, Tim would tell her that if she caught him, she could have her umbrella back. He would then float around Mafia Town until reaching the area right outside the Tailor's Shop. Upon arriving here, Hat Kid would be prompted to jump on the Mafia Goon who had hold of Mustache Girl. Once done, Hat Kid would use the Mafia's head as a springboard to propel her towards Tim, at which point she would grab her umbrella. Hat Kid would then defeat 5 Mafia while receiving combat advice from Tim. Once all 5 were defeated, a Time Piece would appear, signaling the end of the demo.

Tim was removed and never seen in-game after the Prototype Build. He was removed when the storyline of the game changed because, according to Jonas Kaerlev, “we didn’t like that story. It was kinda dumb”. He was replaced almost entirely by a Cleaning Robot, and finally, a Mafia Goon. 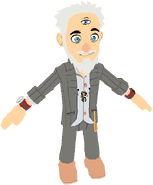 Tim teaching Hat Kid how to attack, in what would eventually become the act Barrel Battle. 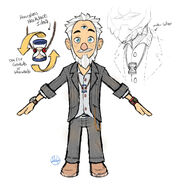