Tim's Friend was a scrapped character in A Hat in Time who would appear alongside Tim, CEO of Time in the early levels of the game, acting as a tutorial for the player. Later in the game, Tim's Friend would bring Hat Kid to the Subcon Forest.

Tim's Friend appears as a black two-dimensional spirit with a white outline. In the center of his chest is a single eye that is usually staring straight ahead, or looking around frantically. Atop his "body" is a shape that resembles a cow skull, albeit with one eye. He appears to emit small black clouds around him.

Tim's Friend served as both a tutorial character, and the way to get to and from Subcon Forest.

Before the Prototype, there was a scene that was only seen in trailers. According to William T. Nicholls, the lead 3D Artist, the scene would have featured a Mafia Goon capturing Hat Kid in the basement of Mafia Town's Seaside Spaghetti. Time would freeze, turning the surrounding area monochrome, the Mafia Goon would turn into a cardboard cutout, and Tim and Tim's Friend would give Hat Kid her choice of weapon, all of which would just result in the umbrella. Upon attacking the cardboard cutout, the Mafia Goon would return to normal, and killing him resumed time. This would result in the silhouette of Mustache Girl to appear in a nearby window and ask Hat Kid if she wanted to take down more Mafia.

In the Prototype, Tim's Friend can be seen quickly sinking into the ground after making some footprints appear on a wall. Upon further inspection, these footprints lead to a button that, when pressed, will make Thor's Hat appear by the Lighthouse.

In development videos released around this time, Tim's Friend can be seen speaking to Hat Kid in the Subcon Forest, and appears to have acted as the way to leave. He gives Hat Kid the advice to stay on the path as "people here get... kind of crazy when they leave the path".

Tim's Friend had no further appearances in the game, outside of appearing in the window of Mafia Town's Seaside Spaghetti. In some builds, when approached, he would float upwards and disappear.

Tim's Friend as seen in the first mission in Mafia Town, circa early 2013 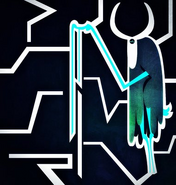