Thor was an inventor cut from A Hat in Time and would have been found in both Mafia Town near his workshop and in Sand & Sails. He was responsible for all the robots found in Mafia Town, and the Hookshot points. In the final game, he only appears in-person as a frozen victim in Queen Vanessa's Manor located in the second floor hallway.

Thor appears to be an adult male. He's commonly seen to be deep in thought, and always has his eyebrows in an inquisitive position. He wears a brown cap with a pair of goggles perched atop, thick gloves, boots, a red buttoned vest over a white shirt, and grey pants. He appears to be carrying at least three bags or pouches on him of unknown content. He has a triangular nose with a long mustache underneath, thick sideburns, and a goatee.

Thor was a major character in almost all versions of A Hat in Time. He would help get Hat Kid up to the Mafia HQ, upgrade her weapons and build her a sand buggy. He was scrapped once Sand & Sails was reworked into Alpine Skyline, as his role in Mafia Town had been cut during the Beta and he had been moved from said chapter.

In the "Prototype: Far From Finished" build, Thor was to appear in the normally inaccessible act "Mafia on Fire", an early version of Heating Up Mafia Town. Here he explained what was going on, and would give Hat Kid the Pogo upgrade and the Hookshot upgrade. Since the act was still incomplete at this point, Thor appears in a T-pose, using an early model.

In the beta build, Thor was the central character of a scrapped act called "Repairing the Canon". In this act, Hat Kid would need to make her way up to Thor's Workshop, and speak to him. Thor mistakes Hat Kid for a lost child and promises her that he'll help find her parents as soon as he's done fixing the cannon. Unable to wait, Hat Kid goes and fixes it for him, prompting a Time Piece to fly out of the now repaired canon.

Thor has been shown, both in-game and through filenames, to be the creator of many objects found around the world of A Hat in Time. He is responsible for:

Thor's Cap was an early hat that granted Hat Kid an attack while in the air. In the playable Alpha, it could be found by pressing a button that caused it to appear near the Lighthouse. The hat was completely scrapped in the final. Its model got a few new pieces added, and became a tier three flair for the Sprint Hat.

After Thor's role in Mafia Town was removed, he presumably became exclusive to Sand & Sails and supplied Hat Kid her sand buggy. Once Sand & Sails was reworked, he was cut altogether. His Workshop in Mafia Town was removed and replaced by a few piles of crates that are climbed in She Came From Outerspace. The Observatory is still present, albeit without the entrance, and spare parts can be found littered around the platform.

Thor's appearance in the final game. 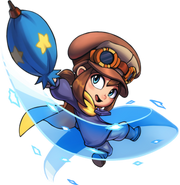 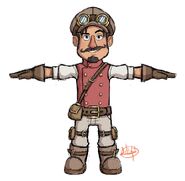 Concept art.
Add a photo to this gallery
Retrieved from "https://ahatintime.fandom.com/wiki/Thor?oldid=19311"
Community content is available under CC-BY-SA unless otherwise noted.