A Hat in Time Wiki
Register
Don't have an account?
Sign In
Advertisement
in: Bosses, Characters, Intruders, Antagonists
English

Lurks in the shadows, he’s obsessed with making me sign contracts!

He is a mysterious, shadowy apparition who resides in Subcon Forest and is implied to be its ruler/overseer, commanding several minions to do labor for him while remaining unopposed to just about anything that is homed in the landmark. He is most infamously known for laying traps for unsuspecting victims to walk into, particularly those who wander into his forest, for where he will usually blackmail them into working for him, or murder them upon first glance. Hat Kid happens to be one of these many victims (having been chosen for the former option), which then kickstarts the chapter's narrative into beginning.

The Snatcher can be depicted as a shadow and ghost-like phantasm. Due to his abilities as a shapeshifter, he can mimic the forms of others. Furthermore, his physical features in his typical and transformation forms are always in flux, except for the palette and face. His most distinguishing feature is his glowing yellow eyes and trickster smile, which is an expression he is often limited to. He also has fur-like extensions for his neck, and being rather tall despite his avoidance of standing upright (his true height can be seen when he dives into the ground), and a pointed tail tapering at the end.

While vile in nature, The Snatcher can be seen as a consolidation of coldblooded, sinister, and at times comical. He is very manipulative and amoral, while adhering an obnoxious and exuberant yet trickster-esque and even downright cruel personality, for he takes enjoyment in toying with and tormenting others for his own amusement and threatens them for his own benefit; depending on the situation he will convey this trait in a demanding and/or menacing manner, while demonstrating a more facetious and humorous attitude in other instances. When Hat Kid first encounters him, he boisterously torments and berates her for falling into one of his traps, though despite hinting at killing her at first he will quickly remark with an offer for her to become one of his henchmen by committing to various forms of labor around his forest through the methodology of contractual hardship. Once Hat Kid accepts, The Snatcher will then reap her soul and will further lure her into doing his dirty work ostensibly claiming to reward her with her soul back if she were to remain subservient as well as validate and complete any task she is assigned. Should Hat Kid refuse this, The Snatcher will then grow enraged with Hat Kid's non-compliance, and will kill her if she chooses to not comply.

Given his manipulative stature, The Snatcher is quick to hamper his victims and barter with them with the use of his many contracts. These can entail doing simple grunt work such as delivering mail to exposing the player to intense danger like a mini-boss fight with an over-sized haunted toilet, which he openly admits is one of the easier ones to choose. When The Snatcher doesn't get his way, his short-tempered side will show. A fine example is when Hat Kid refuses to sign his contracts (as mentioned above) or when she turns the tables in Your Contract has Expired and forces him to relinquish her soul and the Time Pieces in order to never return to the forest again. Even when being conned in his own games, he grants minor (sarcastic) praise to Hat Kid as "quite the character. And a tough negotiator."

Though the Snatcher can be overshadowed by characters such as Queen Vanessa or the Toilet of Doom in their respective Acts, he serves most notably as the instigator of these secondary antagonists by pitting Hat Kid against new threats in order to reach his own personal goals. He achieves this through his contracts, which although they seem like a burden, they enable the player to access the other Acts of Subcon and are typically treated as a necessary evil to completion.

In other areas without such secondary threats, the Snatcher's presence is most often felt in his large ensemble of followers scattered throughout the Forest and often overlooking the player's progress. In effect, The Snatcher is one of the more passive antagonists, choosing to stalk Hat Kid instead of confronting her directly unless giving contracts, direct orders or being confronted in the final Act of Subcon Forest.

In Death Wish Mode, Snatcher takes on the role of primary antagonist, creating a wide assortment of new, more difficult contracts for Hat Kid to complete with the goal of killing her and taking her soul. Throughout these contracts, he will repeatedly taunt and berate Hat Kid with the hopes of disheartening her enough for her to fail and die.

Before battling with Snatcher, he begins to explain further to Hat Kid about how his previous worker had their head pop off, mostly elaborating that it wasn't due to the danger of the jobs performed but that Snatcher had lost all value in the individual. He then shifts his discussion to how Hat Kid's ready completion of contracts have lead to no more tasks to be performed and obligations to be lifted, rendering her use to him obsolete. Finishing off his prelude to the fight is him explaining how the Time Pieces that fell into the Forest were his property and that he would ultimately not let Hat Kid keep them in the end.

The fight immediately begins with the Kid's Hat (and, consequently, all other hat abilities) being stolen, disabling any powers such as sprinting or slowing time and making the fight significantly harder as a result. Note however that some badge effects, notably those that are beneficial like Projectile Badge are disabled as a result, whilst others like the Camera and 1-Hit Hero remain for the duration of the battle.

Most of Snatcher's attacks center around attacking Hat Kid head-on with powerful blasts indicated on the ground prior to their detonation, giving the player some time to react and avoid damage. The first phase includes a basic variant that targets directly below the player and having a final blast ahead of the player to catch them off guard. Shortly after the first attack, Snatcher will explain that he won't turn blue, as a result, he is invincible. Further variants occur in the second phase, with three blasts alternating in a triangular fashion to cover a large area of the arena quickly, to a rotating set of four blasts which slow down and eventually detonate where they land.

Another major attack is a series of vials that are only used in the first phase. They will come in small sets that directly target the player's position in rapid succession, large sets that launch off several vials at a time in an inaccurate manner and a single vial that will smash near the player after a while of tracking if it has not hit the player.

The Snatcher's Minions also play a role as an attack in the battle, huddling in large groups near Snatcher's hands as they rapidly rotate around the arena in a jump-rope type attack that requires the player to jump over the hoards to avoid damage.

In order to progress in the fight, the player must stall until the Snatcher launches a dud flask and throws it back at him. With the vial breaking on Snatcher, he is now permanently blue and can be attacked.

In the second phase, the Snatcher can erupt from the ground, jostling the player if not in the air and releasing a slow traveling ring along the floor of the arena. After doing this up to five times, he lingers for a bit and can be hit as a result.

The Snatcher has an attack that darkens the screen, followed by his face zooming up to the camera, winking his left or right eye. After winking, he appears with a replica on the side that is vacant and then lunges at you. To avoid the attack, the player must attack the correct side in time, indicated by a directional arrow prior to attack. Depending on the eye that winks will depend on which side the Snatcher will appear on. This attack appears exclusively in the second phase.

Finally, he throws out a large stream of red/orange lasers that circle the arena once or twice, requiring the player to dodge by moving inwards or outwards to avoid the blasts immediately to the left, center and right of the player. This attack appears exclusively in the second phase.

Although the Snatcher is tough, he does have his weaknesses.

One is his arrogance, believing he’s invincible because he can’t (or won't) turn blue during the boss fight against him which leaves Hat Kid no choice but to throw a blue vial at him. Another is his blind decision making on who stays alive and who doesn’t; The Snatcher could have killed Hat Kid instantly at the start of the fight, or earlier, but he didn't and his pride led to his downfall.

Furthermore, some of his power seems to be restricted by his contracts, since he couldn't steal Hat Kid's soul until she signed the contract. The Snatcher is frailer than other bosses, only taking five hits to defeat, the least in the game. Despite being apparently beaten by Hat Kid, he goes from seemingly weak and pleading for mercy to growing massively in size and anger in an instant; this perhaps indicates that, by Hat Kid fulfilling her contract, he couldn't actually bring his full power against her and had to bargain with her rather than make her leave by force. This also furthers his manipulative nature (see: Personality), as he's able to switch from crocodile tears to his true bitter self in an instant.

The Snatcher's previous form (in the storybook "The Tale of Queen Vanessa") as the Prince, before Queen Vanessa went crazy.

Snatcher greeting the player as they enter Subcon Village.

Snatcher, along with his minions, rotating around the arena.

Snatcher blacking out the arena, winking at the camera and attempts to attack Hat Kid.

The cutout Snatcher uses during the blackout as a decoy.

Snatcher after being hit by one of his blue potions.

Snatcher after he has lost the fight to Hat Kid.

Snatcher jump-scaring the player and forcing them to sit down as he bargains with them to leave him and his forest.

Snatcher's (other) face as he goes through the idle animation. 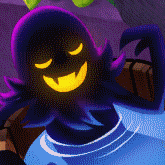 Snatcher as he appears in beat the heat's loading card.

The book Snatcher is reading.

The chapters and pictures of the book.

The back of the contract which Snatcher has Hat Kid sign. 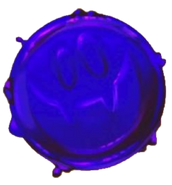 Snatcher noticing that you haven't beaten Your Contract has Expired.