A Hat in Time Wiki
Register
Don't have an account?
Sign In
Advertisement
in: Characters, Bosses, Antagonists

This guy claims to be a "Bird" but when's the last time you saw a bird that looks like that?! He's obsessed with winning....

The Conductor is a major character in A Hat in Time who mainly appears in Chapter 2: Battle of the Birds, as the optional deuteragonist or main antagonist. He is a movie director who creates western based films, and has Hat Kid star in two films called "Murder on the Owl Express" and "Train Rush". As his name suggests, he also conducts a train called The Owl Express.

Having a rivalry with DJ Grooves, he's one of the two birds whom Hat Kid can help win the competition for the Annual Bird Movie Awards.

The Conductor is a very loud and outspoken person, most of the time he can be rude and angry (but on some occasions speaks softly). He also has a disregard for the player's safety or anyone at all saying that it's for the name of cinematography. Depending on the player's actions during his chapter of the game, in the chapter finale, he can be rather petty, planning to use the Time Pieces to fix one loss compared to Grooves having lost all but one. During the same scenario, he is also very condescending, stating that Hat Kid had a tiny part in his success despite it hinging on her massively. However, in the alternate scenario, he will attempt to help Hat Kid, showing that he does not lack all empathy. He also cares very deeply for his grandkids, as is both shown in Bon Voyage! with him affectionately commenting on them as well as during Rock the Boat, where he is in the daycare, implying to have been searching for them. He also likes to use the word peck (which is a considered the equivalent of the f word in A Hat in Time) and often likes to call people he has qualms with 'peck necks'.

The Conductor plays 3 roles in the game, one of which depends on who wins the Annual Bird Movie Awards. The first is in "Murder On The Owl Express", where he is one of many suspects in the murder of one of the Express Owls. He also plays the part of himself in "Train Rush", where the train is beginning to explode.

In the first act of the chapter, the Conductor is first seen arguing with DJ Grooves, accusing him of stealing his idea for a movie prop (which DJ Grooves denies, saying the Conductor was the one who copied his idea). After, he boards up the door to DJ Grooves’ side of the studio, happy with his plan of trapping them in there until he realizes that shutting them inside the studio will force them to work harder. Throughout the rest of the act, the Conductor is spotted in multiple places directing his movie. At the very end, he will threaten to sue Hat Kid and accuse her of fraud, but when he can't take her to jail, and he figures out she is helping DJ Grooves, he demands that she star in his movies to “even the score” against DJ Grooves.

Murder on the Owl Express

In Act 2 of Chapter 2, the Conductor greets Hat Kid by saying that he doesn't have a script ready yet, and that he would call her when he did. After the murder victim is discovered, he will angrily demand answers regarding the identity of the murderer. After he's told not to leave the caboose, he tells Hat Kid to go investigate who really committed the murder. If Hat Kid talks to him after you find evidence that he murdered the owl, he will laugh and tell her to find all the evidence first.

At the end of the act, the Conductor asks who did the murder. His reaction depends on who you choose. If he is chosen, he will try to angrily deny it at first, until admitting it was him. He will then award Hat Kid the timepiece.

After Hat Kid pulls the switch that activates the bombs, he will call her on a video camera and explain what she just did. He can be seen on these screens yelling at the camera as Hat Kid rushes through the train. At the end, he in the front of the train, perfectly capable of turning off the bombs himself. He then awards Hat Kid the timepiece.

If Hat Kid has him as the winner of the Annual Bird Movie Awards, The Conductor will give them a single Time Piece, calling it as tiny and insignificant as her role in helping him win and suggesting that she could sell it on eBird for dimes and nickels.

During the actual Award Ceremony, The Conductor can either be a villain or an ally depending on who won. If he was the winner of the award, he will be the main antagonist of the chapter, but if he lost, he will help Hat Kid during the final fight.

If The Conductor wins

While sneaking around in the basement of Dead Bird Studio, the muffled voice of The Conductor can be heard through the walls, mentioning the left over bomb from the train that he has decided to hold onto just in case "someone" showed up.

After Hat Kid encounters The Conductor at a gigantic stage, he states that he won't be giving the Time Piece up without a fight. During the beginning of the battle, The Conductor has four basic attacks: the first will lunge at her with a slight splash around where he lands, a wrestling-style drop from the left or right balcony that aims directly at Hat Kid, whistle for stage lights to fall onto the arena and drop down on a disco ball that sends out shock waves.

At the fight progresses, he gains extra attacks: darkening the arena as he charges at Hat Kid with a knife, rapidly swing multiple knives to require a Dive Attack and call upon cars to circle her in the middle of the stage before driving into each other in the center. On top of the Disco Ball Drop being able to fake out the player with a delayed fall, The Conductor can create photo copies of himself to magnify the effects of both the knife charge and the disco ball drop by adding more knives and ball drops respectively. The lunge attack is lost from this point and the balcony drop is also absent.

Midway through the fight, he will stop to have a little "Heart to Heart" with Hat Kid. Upon sitting down, he will tell her that the reason for him wanting to keep the Time Piece is that he wants to right the loss that was "Annual Bird Movie Award #42", upset that DJ Grooves won. Hat Kid can either tell him "Maybe" or "Nope" when prompted if he could use the Time Piece. If Hat Kid says "Maybe", he thanks her, but then declares that she cannot leave the room without dying because he cannot risk DJ Grooves finding out he cheated. If Hat Kid says "No", he will tell her that she is a greedy young lass and that she was going to have to take it from him by force. Either option, he will proceed to strap a bomb onto her, giving her 80 seconds before she explodes for an instant kill.

The Conductor will then continue to attack Hat Kid with yet again a new set of moves: he can take out a large saw blade that he throws across the floor in sets of three (one aimed directly at Hat Kid, with the others slightly to the left and right), jump up to the balcony to toss out several volleys of three saw blades before doing the balcony drop himself and running around the stage in a frenzy, taunting Hat Kid about how the bomb will explode soon. The player now needs to hit him 4-5 times before DJ Grooves will step in, saying he will find a way to defuse the bomb. After 4-5 more hits, DJ Grooves will come back with some defuser and direct Hat Kid over to him, making both the bomb and the timer disappear once she goes over to his location.

In frustration of the defusing of the bomb, The Conductor enters the final phase of the battle, where he sends four parade owls with knives to follow Hat Kid around in an attempt to stab her. Most attacks gained leading up to the second phase are lost, with the Conductor doing the lunge, balcony drop, single Disco Ball Drop without a stall, calling stage lights and the rapid knife swinging attack. Upon taking six more attacks, he will be defeated, angrily calling Hat Kid "peck neck" before falling unconscious on the floor.

In The Finale, he is one of the many people standing in line to be judged. At the end, he tells Mustache Girl to "Get Lost", along with everyone else. He has an active part in the battle, standing on top of the mafia ball and trying to hit Mustache Girl with it. During the final phase of the fight, he and DJ Grooves punch each other with all they got, turning themselves into Pons to help Hat Kid defeat Mustache Girl. He comes back after time is reset, and is hanging onto Hat Kid's Spaceship from outside begging Hat Kid not to leave along with DJ Grooves, Snatcher, Cooking Cat, and a Mafia Goon.

The Conductor makes minor to major cameos in Seal the Deal, where he can be encountered throughout the Arctic Cruise's three acts, bringing along some of his Express Owls and his own Grandchildren to enjoy the cruise.

For Bon Voyage!, he is seen at the docking pad with a few of the grandchildren, getting ready for the cruise to begin. Once the ship sets sail and Hat Kid signs into the desk, he is located at the poolside Bar drinking what is called "Sinking Ship" on the rocks. He is also seen in this location in Ship Shape, where he is much more intoxicated from the other drinks he has consumed prior. In these two acts, he serves as an NPC.

Rock the Boat is the most involved that the Conductor is in the story, as he serves as a minor antagonist to the main threat of natural disaster of the ship being capsized, where he plays as the most vocal and impatient of the survivors of the last life boat. He demands that Hat Kid leave behind Walrus Captain before all of the others perish to the cold, causing a timer to start counting down before his impatience gets the last life boats to leave both Hat Kid and the Captain for dead for an instant kill.

The Conductor as he appears in the title card for his fight. 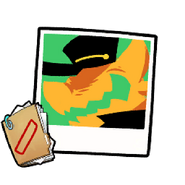 The Conductor as a clue in Murder on The Owl Express.

The Conductor and DJ Grooves in the Act 1 title card.