Science Owls are an early version of what would eventually become Express Owls. Their main appearance was in the act Train Rush, where they would attempt to prevent Hat Kid from reaching the front of the train. They also were to be the creators of the Owl's Brew Badge, which was later replaced by the Brewing Hat seen in the final game.

Science Owls share many visual similarities with Express Owls, with the only notable differences being their clothing. Science Owls are clothed in a long, white lab coat which reaches down to the tops of their feet. Underneath, they wear a plain white shirt, and a light red tie. They also wear a small pair of rectangular glasses, perched atop their beak. Unlike the Express Owls, they are never seen wearing hats.

Science Owls went through a second design change, though unlike the lab coat variant, these were used in the final game for the Express Band.

Much like their final counterparts, Science Owls played the role of NPCs, both friendly and hostile.

In the playable builds, the only Owls encountered are hostile. However, in the Alpha Build's title screen they can be seen in the background alongside other characters.

Early screenshot showing Science Owls before they had a proper model. 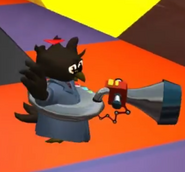 Science Band in The Big Parade 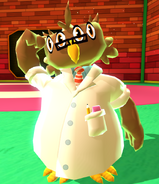 A Science Owl from the Alpha's Main Menu. Note the broken UVs causing the owl to have 4 eyes. This may be caused by the owls using an earlier model. 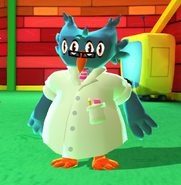 Ditto. Note the blue feathers as opposed to the regular brown. This coloration is not found anywhere else. 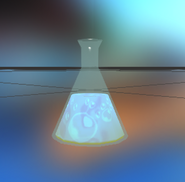 The regular blue potion thrown by Science Owls in the alpha. 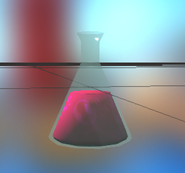 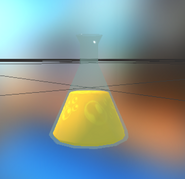 "Test Tube" variants to the 3 potions spawned in game. Their textures are found inside the texture sheets to each of the 3 potions, but it is unknown for certain what they would have been used for.