Sand 'n Sails was comprised of a chain of desert villages, with wide stretches of sand between. To traverse these dry, dangerous, snake-infested dunes, Hat Kid would hop onto her Sandmobile. Players needed to carry water flasks while traversing between areas, or Hat Kid would die of thirst. The chapter was fully open, and players could get Time Pieces in any order they'd like. No acts were to appear. Areas would be surrounded by a red ring to signify its boundaries.

In the final build of the game, Alpine Skyline shares the same concept of exploring a large open world. 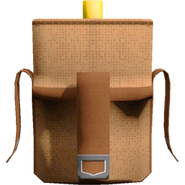 Travelers and cactus-like NPCs would populate the villages that Hat Kid would travel to. The Travlers were reused as Nomads for the final game while the Cactus NPCs were cut altogether.

It is presumed that the Sandworm was intended for this chapter. Thor was planned to give Hat Kid her Sandmobile, but was cut from the game following the chapter's transition to Alpine Skyline.

Early group art featuring both the Traveler and Cactus NPCS. Jonas Kaerlev explained in an interview with Beta64 that the decision to rework Sand n’ Sails into Alpine Skyline came about while the team was trying to make traversing the map more interesting. The team experimented with auto-generating obstacles in the desert (a move Jonas said “never felt right”) and giving Hat Kid special running shoes that allowed her to traverse the desert faster. Eventually, an idea of making platforming sections over toxic sand came about, at which point the team decided to use the hook shot on ropes instead. After implementing this, the team realized the toxic sand didn’t make sense, so it was changed to a pit, with the justification being that the areas of the map were on giant sand pillars. After this was implemented, it was decided to rework the level intimate Alpine Skyline, as changing the sand pillars into mountains and the ropes into ski lines made more sense.

Here's Hat Kid next to her sweet sweet cruise, ready to take on the desert! Oh, and watch out for snakes!

Who's this sneaky fella, and why's he so happy? Our second showing of Chapter 4: Sand and Sails!

Hat Kid has decided its party time in Chapter 4: Sand 'n Sails! She made the trees dance, just like in her favourite video game! Can you guess which game it is?
Community content is available under CC-BY-SA unless otherwise noted.
Advertisement