Bush cat
Rough Patches, also known as Bush cats, are a cut Enemy that would have appeared in the Subcon Forest. This enemy would have originally concealed itself in plain sight by tucking its legs and tail inside their body and hiding its face, there-fore disguising itself as a bush, until Hat Kid would to approach it. At this point, it would jump out and chase after the player. In the final build of the game, the rough patch only appears in Vanessa's Manor as a frozen victim. Rough Patch has have 5 health.

The Rough Patch appears to resemble a hybrid of a cat and a bush. Its torso is spiky and resembles the bushes seen around the forest. When active, the rough patch reveals itself, exposing its tail, legs, and face. The legs are shaped like that of a normal cat and are a dark, reddish-brown. Its tail is the same color as its legs, and has a club shape, complete with spikes at the end of it. The tail also contains two yellow stripes, making it appear similar to a raccoon's tail. The rough patch's face shows four large, spiky teeth inside an open mouth, and two large, ovular eyes, all a slightly orange shade of yellow. The rough patch was designed by Shane Frost.

While idle, the rough patch will remain mostly motionless, shaking its bush every so often. If the player begins to approach the rough patch, it will begin shaking much quicker and begin warning the player of its presence, both by emitting a warning sound (which is actually a heavily modified sound of a cat purring) and emitting a sort of warning radius, to which it will begin chasing the player if they step inside.

In the alpha and beta, the rough patch is vulnerable and can be killed in a few hits (although it cannot be fully loaded in the beta build and is therefor nonfunctional.) In the final release of the game (at least up to version 1.0) The rough patch, if spawned in, is only susceptible to chemical explosions.

It is unknown why the Rough Patch was removed from the final version of the game, although it is worth mentioning that the headless statues that are seen in the final game essentially function identically to the rough patch, save for their immunity and lack of warnings. 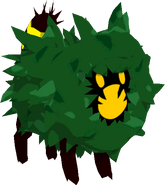 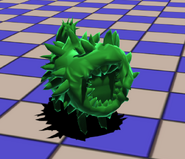 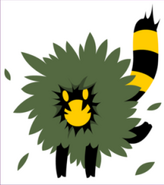 Concept Art of the Rough Patch by Shane Frost. 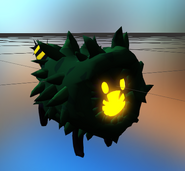 The Rough Patch's final model in the editor. Note that the face glows. 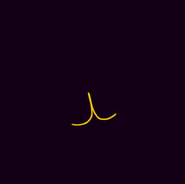 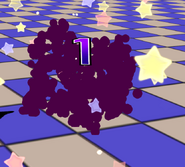 The Rough Patch turning into particles upon dying in the Alpha.