R. King (presumably short for Roach King) is a mysterious character that leaves notes on Hat Kid's Spaceship before supposedly turning himself into gold. Not much in known about this character.

R. King leaves several notes in hidden places for Hat Kid. It is easiest to find these notes using the Camera badge. Each note has a clue saying where the next note is.

The first note is found behind the purple chair in the corner of the room. The second one located underneath the red toolbox on Hat Kid's desk. It reads: "IOU 1/2 cookie. Check kitchen - R. King".

The third note is behind the large garbage can in the corner of the kitchen.

The fourth note is in the first part of the engine room (before the hookshot is used). It is located behind the washing machine with the circular door.

The fifth note is located at the end of the table on the right side of the room, behind and underneath the grey box.

The sixth note is located behind the bookshelf on the side of the room opposite of the door to the living room.

R. King's Castle is located in the attic underneath the platform the telescope is on. On the right side against the wall, there is a small hole in the platform. Taking the camera through the hole reveals a small passage way filled with cobwebs. Following this passage leads to the castle. R. King is there, who apparently turned himself into gold. The objects R. King borrowed from Hat Kid are also there, which have also been turned into gold. With R. King is another note. Inside the caste is a wheel of cheese, a trophy, a slice of cheese, and another note. 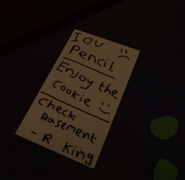 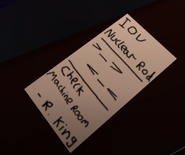 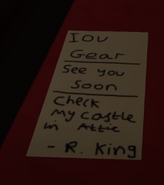 The hole in the platform leading to R. King's castle

The passage way to the castle

R. King and his castle

The note outside the castle.

The interior of R. King's castle

The note inside the castle
Add a photo to this gallery

Retrieved from "https://ahatintime.fandom.com/wiki/R._King?oldid=18957"
Community content is available under CC-BY-SA unless otherwise noted.