Lives in the haunted manor and gives me the major creeps. Eek! It gave me the creepies too!

Queen Vanessa is an enemy encountered in A Hat in Time, as the lone living resident of Queen Vanessa's Manor at the center of Act 4 in Subcon Forest, and overall serves as the secondary antagonist of Chapter 3.

Queen Vanessa appears as an inhumanly tall, shadowy figure whose form is comparable to constantly shifting smoke, though official artwork, the final page of the Storybook and the shadow she casts actively portray her with thin arms, long messy hair and a large hunched-over stature.

The only real distinguishing of her in-game model are her eyes which ignite in a bright red glow. It is possible that Vanessa is human given the largely humanoid design provided by the Storybook. However, this has issues due to the Queen's ability to transform trespassers, including Hat Kid, into ice. Since no other human character without the assistance of the Time Pieces could possess any major magical abilities combined with her unique shadowy shroud, makes the true species which Queen Vanessa belongs to a mystery. She has also a red and white outline and fully black in the inside and has red eyes in the shape of stars.

Though little is known about Queen Vanessa, it is obvious that she is obsessive and highly dangerous. She will often speak out to Hat Kid with a sincere tone, as well as attempt to lure her with false offerings such as cookies or tea. The Queen also speaks to herself as well, often times laughing without any definite cause. Upon locating Hat Kid she will immediately chase her and, if Hat Kid is caught by the Queen, she will be frozen in ice. As seen throughout her house, many unfortunate past intruders are often found in different rooms around the manor showing that the Queen attacks anyone who enters. These include Mafia Goons, old men, Subcon Dwellers, and other assorted figures. Whether they were left in place or even positioned in another room by the Queen is unknown.

Through random notes which may have belonged to a diary or been letters, it is found that the Queen had a compulsive interest in someone she calls her "Prince". Queen Vanessa loved him obsessively to the point of styling his hair to match hers, banning bacon from breakfast because he "loved it more than her", and even becoming highly upset being called Queen because then she was no longer her prince's "princess".

A portrait can be found in the manor of both a man and woman with crowns, likely being a portrait of both Queen Vanessa and the Prince in an earlier age. Neither one has a clear face.

Queen Vanessa's backstory can be discovered by reading the notes scattered around her Manor, using the Dweller's Mask in the Basement and Attic, and by collecting all pages of the Storybook in the Sleepy Subcon Time Rift.

The letters and diary entries depict her story of her being completely enamored by her Prince to the point of obsession. In her diary and scattered pages, Hat Kid can read about Queen Vanessa's jealousy when her Prince was being educated by a female tutor, making several exclamations that the tutor got all his time while she only received letters. In his absence Vanessa states that she wishes she could keep him in her manor so that he'll never leave again, but admits that she couldn't just keep him chained up in the basement. This serves as intense irony, as after the letter was written, the Prince would end up just like that.

The Storybook of Sleepy Subcon is a different part of Vanessa's story. In the Storybook, Vanessa sees her Prince holding hands with a florist lady and she runs away heart broken. The next page shows that the Prince had just been handing the florist a coin to pay for flowers to bring to Vanessa. When the Prince goes to bring her the flowers, Vanessa has already flown into a rage and she chains him up in the basement. It may be possible that the events of the Storybook happen when the Prince returns from his tutelage and plans to surprise her with flowers when he goes to see her, although Vanessa being love sick, rushes to see him and everything falls apart. This could also serve as the instigating factor where Vanessa's intense enamor for the Prince transitions to the point where she locks him up out of spite for his supposed betrayal.

Another clue the storybook provides to Vanessa's backstory is its explanation of how her powers over ice began to manifest. On the fifth and sixth pages specifically, after fleeing from the false betrayal of the Prince, Vanessa is shown visibly crying as the Prince interacts with her. The tears themselves however begin to resemble ice crystals, as well as her hands becoming more sharp and hooked, her skin becoming more dark and her hair wicking up a dark cloud, becoming a light brown from the golden blonde hair of prior panels. The sixth panel further emphasizes the complete transformation to her current form, developing a slight hunchback, covered in shadow and her hands now more than ever turning inwards like claws or talons.

These clues suggest that Vanessa's uncanny ability to freeze her intruders as well as her shadowy appearance stemmed either from a dark energy that corrupted her when she was most emotionally distraught, or it was her heartbreaking that caused the darkness to manifest and the distress itself to cause such visible and tactile alterations. In later story book pages added by Seal the Deal, it shows that her dark energy resulted in the freezing and death of all who lived in her kingdom, going as far to leave all the children's souls trapped in what is now Subcon Forest.

When using the Dweller mask near the basement's back wall, the silhouette of a man becomes visible, having been shackled to the basement wall until death. It seems reasonable to assume this is the same silhouette as the Prince, since the same tragic pose can be seen being made by the Prince as depicted in the Storybook.

Though it is not confirmed explicitly in the game, the eighth panel where the Prince is chained to the wall shows his body changing in the darkness, heavily implying that the Prince would soon become The Snatcher. This, alongside several of the many comments made by Snatcher during Death Wish Mode about coldness, death and love heavily implies that Snatcher and Queen Vanessa were at least once lovers.

When Hat Kid exits the cellar of Vanessa's Manor into the hallway, the Queen immediately becomes aware of Hat Kid's presence in the hall and enters in search of her. Afterwards she begins searching through every room in the manor in order to seek out Hat Kid.

As the only other major living character in the manor to the intruding Hat Kid, Vanessa plays a very intimidating role in following and hunting down Hat Kid as the player progresses through the level, often pacing in the hallways waiting for the player to emerge of their own accord to snatch them up and freeze them, leading to an instant death. As such, on top of the limited use of Hats and the loss of the umbrella attack, Vanessa serves far more as a hazard than a traditional Enemy in that the best way to progress through the level is to avoid her and hide at all costs if avoidance is impossible.

When triggering certain events, Vanessa will willingly go through doors in order to investigate, requiring the player to either hide before the Queen can see them and she leaves the room, or to leave the room themselves in order to evade Vanessa.

In the second floor, attempting to collect the final key will cause Vanessa to take it and take a shower in the bathroom. Here, the player must attempt to collect the key and escape before the Queen sees them from the steam and chase them down. If the player cannot obtain the key, they can wait outside and far away from the bathroom, as Vanessa will leave the key unguarded and enter her bedroom after exiting the shower. 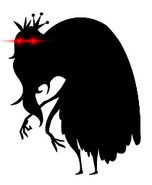 A closeup of Queen Vanessa in her manor.

Queen Vanessa casts her shadow.
Add a photo to this gallery

Retrieved from "https://ahatintime.fandom.com/wiki/Queen_Vanessa?oldid=19309"
Community content is available under CC-BY-SA unless otherwise noted.