The Pink and Yelo Plants (latter also sometimes referred to as "Yellow Plants" by the community) are cut plant enemies that would have appeared in the Subcon Forest. These plant enemies were found all around the forest and would attack Hat Kid exclusively through attempting to bite her when she approached. They are not found in any playable builds of the game (save for being spawned through the console in some builds of the final game) and are the evolution of the Light Plant, as indicated by their recycled class name. They each have two health.

The Pink Plant appears as a large pink flower, speckled with light pink marks on its "head." Its stem is coated in thorns, and there are leaves at its base. Behind its head, there are three spiky, hot pink petals that enlarge as it attacks. Its head is split both horizontally and vertically, separating it into four separate parts which open up as it attacks.

The Yellow Plant (referred to as "yeloplant" by its model name) appears to be slightly smaller than the Pink Plant, and has a yellow head with orange speckles near the back. Its stem is smooth and lacks any thorns, but the base of its stem is coated in rocks as opposed to leaves, hinting at its unique movement ability. Unlike its Pink variant, the Yellow Plant has two large leaves behind its head, as well as many smaller, skinnier leaves surrounding its head, forming a mane, that all grow while attacking the player.

When in their passive state, the plants will gently sway left and right, flapping their leaves and petals. The Pink plant appears to move in this motion slightly faster than the yellow plant for some reason.

The Pink Plant, when in its aggressive state, will turn a red tone and begin pulsating its petals and vines, before lunging its head forward towards the player, opening up its "jaw" and attempting to bite. It will continue to do this so long as the player is within its range.

The Yellow Plant, upon spotting the player, will tunnel down into the ground below it, emerging somewhere around the player, usually in front of wherever they are running, and readying itself to attack in the same way as its pink counterpart. because of this, the yellow plant is much more difficult to evade, as it will continuously try to keep the player in its range.

Unlike the Light Plants, the Pink and Yellow plants are unable to perform spin attacks or fire projectiles at the player.

It is speculated that the Pink and Yelo plants were removed from the game due to them having the same attack bug as the Light Plants, with their inability to damage the player while remaining still being much more prominent in this later evolution of the enemy. 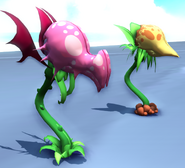 The Pink and Yelo Plants, swaying blissfully unaware of the world's hardships

The Pink Plant in its Idle state. 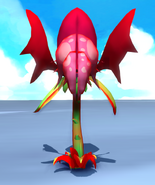 The Pink Plant in its Aggressive state, about to attack. 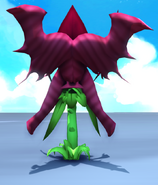 The Pink Plant lunging at the player with its jaw open. 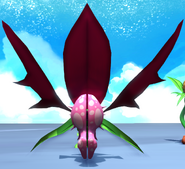 The Yellow Plant in its Idle state.

The Yellow Plant in its Aggressive state, about to attack. 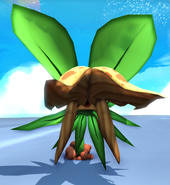 The Yellow Plant lunging at the player with its jaw open. 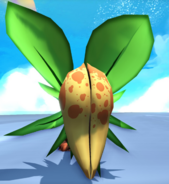 The Yellow Plant tunneling into the ground.

The Yellow Plant emerging from underground. 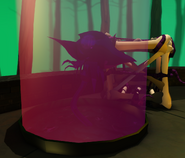 The Yellow Plant as seen in Sleepy Subcon. 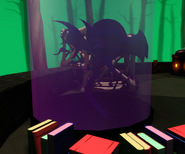 Ditto, with the Pink Plant.

A Pink Plant seen in a promotional screenshot on the Hat in Time Steam page.
Add a photo to this gallery

Retrieved from "https://ahatintime.fandom.com/wiki/Pink_%26_Yelo_Plants?oldid=17665"
Community content is available under CC-BY-SA unless otherwise noted.