A Hat in Time Wiki
Register
Don't have an account?
Sign In
Advertisement
in: Article stubs, Levels

Battle of the Birds Bonus:

DJ GROOVES as
THE STYLISH MENTOR

Picture Perfect is Act 3 of the second Chapter: Battle of the Birds.

After each mission Hat Kid will write about it in her diary, which can be found in her room under the swimming pool of pillows. The diary will only read the entry for the last act that was completed.

"Ohmygosh!!! That big penguin DJ said I could be a STAR!!! I wonder if he means like pop star... Wait. Do I have to learn how to sing? Maybe an internet star -- no, no, a MOVIE star!

" DJ Grooves says he's going to take care of all that stuff, I just have to show up on set, and I'm gonna be famous! I can't wait... I just hope I don't have to sing.

▪If co-op is activated when Hat Kid gets a picture taken, a doodle of Bow Kid will appear also.

▪After you complete the act, pictures will appear on a wall in the room with the act 2 telescope. 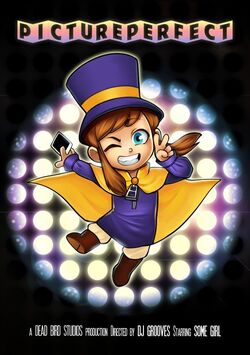