A Hat in Time Wiki
Register
Don't have an account?
Sign In
Advertisement
in: Article stubs, DLC
English

The DLC adds a new chapter of the same name called Nyakuza Metro. In this chapter, Hat Kid faces off and works with The Empress, a crime boss of the metro with an eye for shiny objects and Time Pieces. With 10 new Time Pieces to collect between the large free-roam style map and a new Rumbi Factory Time Rift, Hat Kid will have a lot to deal with.

Online Party allows for online functionality for A Hat in Time, displaying other players in areas such as The Spaceship and even within levels. For greater effect, the option to limit online availability to a group of friends allows players to play levels for a top position and unlock new achievements, with up to 50 players able to play in a single group at a time and four players to play a level alongside each other.

This is not available on the Nintendo Switch, nor on Playstation either.

The Camera Badge sees large-scale changes in this DLC, with the addition of a menu when right-clicking rather than enabling/disabling Depth of Field. Now the menu holds all relevant features: Field of View, Depth, Focus, Filters, having the camera orbit the player or free movement, ability to edit face emotion and poses while in freeze-frame and even able to record GIFs.

Stickers have many uses in the Nyakuza Metro DLC, equipped to be used for communication, decorating Hat Kid's weapon and for the Camera, able to decorate the picture with many different stickers for an added flare.

Nyakuza Metro + Online Party adds many new customization options, such as new flairs, dyes, badges, camera filters and introduced new outfits for Hat Kid to wear, most of which can be purchased from various gang vendors found within the metro. Even Stickers can be used to customize both Hat Kid's weapon, as well as add up to three communication options with varying voice lines. Alongside normal customization options, this DLC also adds in the option to change between the default Umbrella and a purchasable Baseball Bat. They are both functionally identical, being purely cosmetic.

Three new badges were introduced, a Gameboy filter, a Virtual Boy filter, and the Peace and Tranquility effect whenever the player is dancing with the umbrella or posing with the baseball bat.

The original teaser image for the DLC

Hat Kid's new Nyakuza Varsity Jacket, along with a hat flair for the Brewing Hat and bat. The community is calling this combo "Cat Kid"

The Nyakuza boss. She was called "The Empress" in the preview stream on twitch

Hat Kid in her new outfit, holding a Time Piece

The metros seemed to not be self powered, but instead are drawn by giant cats

Hat Kid finding one of the new stickers

A cosmetic change to the potions thrown by the brewing hat, turning it into money explosions instead

A new dye called “Too hot to handle”

A new hat flair for the Brewing Hat

A new hat flair for the Dweller's Mask

A new hat flair for the Sprint Hat

A new hat flair for the Time Stop Hat

A new hat flair for the Time Stop Hat

Effects of the Retro Badge

Effects of the Redtro VR Badge

The Nyakuza Metro map, with (almost?) all of the acts unlocked

The Effects of both the Retro badge and the Redtro VR badge, at the same time 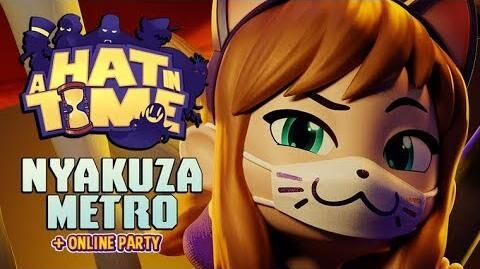