A Hat in Time Wiki
Register
Don't have an account?
Sign In
Advertisement
in: Characters, Bosses, Playable characters,
and 4 more
English

This is Mustache Girl, who seems friendly on the outside but don't let the facial hair fool you! She's after my time pieces and I can't let her get away with them!

Mustache Girl is the main antagonist in A Hat in Time. Her goal is to get all of the Time Pieces before her former best friend turned enemy Hat Kid can, so she can use their power to fight "evil."

Mustache Girl, as her name would suggest, is a small girl with a mustache. She wears a red hooded cape, a rose pink tunic with a purple sash, purple pants, and green shoes. A medallion with the shape of a star engraved into it holds her cape closed. She has tawny eyes and blonde hair, which she styles into loose pigtails with purple ribbon and turquoise beads.

Mustache Girl's red cape gives her a resemblance to Little Red Riding Hood, the titular character of a folktale of the same name.

Mustache Girl is unruly, rebellious, and snarky. She has a strong sense of right and wrong, dividing the people of the world into "good guys" and "bad guys". She has stated that she is willing to do "anything that involves messing up the Mafia", a group she has declared "bad guys". Her obsession with justice has led to her preferring to punish those who oppose her ideals instead of forgiving them, usually through death or (in the case of the Mafia Boss) having their brain transferred to a jar. It is implied that she has a fear of loneliness, when the people acquainted with Hat Girl starts sacrificing themselves to give her pons during the final battle and Mustache Girl start to get fearful over the thought of being alone.

Mustache Girl is first seen in Mafia Town taking out a couple of Mafia goons before running away after being spotted by Hat Kid. After running through the streets, she will accuse Hat Kid of stalking her and ask if she wants to join Mustache Girl in rebelling against the Mafia. She will then ask if Hat Kid had anything to do with the time pieces falling from the sky. After Hat Kid makes it up to her tower, Mustache Girl will then direct her to where one of her Time Pieces has fallen.

In Act 2, Mustache Girl has been captured by Mafia goons. After Hat Kid rescues her from their clutches, the two girls become friends and agree to take down the Mafia together.

Down with the Mafia!

In Act 4, after being saved from the Mafia goons again, Mustache Girl and Hat Kid team up to infiltrate the Mafia's headquarters. During the battle with the Mafia Boss, he reveals that he has Mustache Girl caught, and plans to kill both her and Hat Kid as soon as the fight is over.

Once the Mafia Boss is defeated, Mustache Girl becomes aware of the Time Piece's power and wishes to use them to stop the Mafia from ruining her home island. Hat Kid refuses, leading to Mustache Girl betraying Hat Kid out of anger and revealing her true goal: Destroying every "bad guy".

After the fallout of Hat Kid and Mustache Girl's splitting, Mafia Town suffers from a major natural disaster due to someone turning on the giant faucets and changing all of Mafia Town into a lava-flooded landscape. While the Goofy Mafia at the start questions if it was Hat Kid who did this, it becomes readily apparent that Mustache Girl was behind turning on the faucets.

Though not an active participant in the story of Hat Kid, The Conductor, and DJ Grooves, her presence is given away by some subtle cameos found throughout the levels in the chapter. Notably, her writing is found in one of the rooms of Murder on the Owl Exrpess, on a blackboard in the room with the first piece of evidence. A second writing is also found in the B3 floor of Dead Bird Studio's basement.

Once Hat Kid has collected at least 25 Time Pieces, Mustache Girl will sneak into her spaceship and access her supply of them, causing the planet to undergo radical transformations as her changes to its history degrade its normally watery and vibrant colors into a lava-filled wasteland, with her newly created castle as the only thing seemingly unphased by the lava and heat.

In the finale, Mustache Girl has declared herself the leader of the world, promising to rid it of bad guys. However, she becomes corrupt and forces everyone to line up and be judged as good or bad. Hat Kid then appears and skips to the front of the line. Mustache Girl initially judges Hat Kid as good, but Hat Kid can decide to fight anyway. If Hat Kid does decide to fight Mustache Girl, it will begin the final boss battle. During the battle, Mustache Girl is labelled as a bad guy by Hat Kid's spectating supporters, who sacrifice themselves in order to give Hat Kid the Heart Pons she needs to overpower Mustache Girl and turn back time.

After Hat Kid appears on her ship with all the recovered pieces, she will check on what happened to Mustache Girl. Finding her unconscious on Mafia Island, she decides whether or not to give her a Time Piece. If the player does, it floats to the surface of the planet. If they don't, all the pity disappears from Hat Kid's face and she tosses the piece back in the pile. There is no result from doing either.

Early Screenshot of A Hat in Time, showing "Mou-Girl" and an early Hat Kid. The Dialogue is a reference to the game Rhythm Tengoku.

"Mou-Girl's" model used as a placeholder for a cut character known as the Detective. 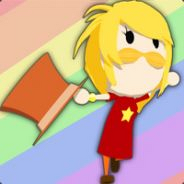 Prototype model for Moustache Girl on a rainbow background

Mustache Girl as she appears in the 1.0 Icon for A Hat in Time

One of the two paintings of Mustache Girl found in Time's End.

Another painting of Mustache Girl in Time's End.

A drawing of Mustache Girl seen on a whiteboard in the act Award Ceremony. 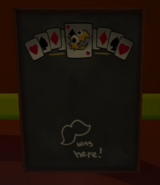