The Moonjumper (also known as The Moon Jumper) is a mysterious puppeteer and one of the main antagonists of Chapter 3 that was scrapped from the final game. He, with Queen Vanessa and the Snatcher, compete for the ownership of the Subcon Forest.

The Snatcher claims that the Moon Jumper used to live in Vanessa's manor.

The Moon Jumper bears a striking resemblance to Vanessa's Prince, having an identical jacket and chains around his wrists likely from his imprisonment beneath Vanessa's Manor.

The Moon jumper is not implemented into the game, although his graphic and his 2D model does appear in the game's files.

Early developer commentary claims that Moonjumper was 'stuck in the horizon', likening it to a prison that he is unable to leave, and that throughout the original level of Subcon Forest, he would attempt to get Hat Kid to join him in the horizon.

According to Jonas Kærlev, the lead developer, "Basically early on while writing A Hat in Time, I wanted to introduce a lot of characters. So I wrote a lot of characters. When I grew as a writer & game dev, I found it better suited to focus on few characters and evolve them through gameplay. That's why the main characters often interact with you via gameplay (movie scores, contracts, etc). When Snatcher became the main character of Subcon, there wasn't space for any subplots, and so Moonjumper was [removed]". 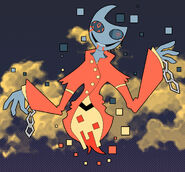 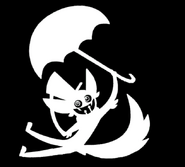 An image found within the game's files, labeled as "moonjumper".

Ditto with added text, used on the game's Kickstarter to announce the 6th chapter.

Ingame footage from the Chapter 2 Trailer.

Ingame footage from Jonas Kærlev's developer commentary, showcasing some of the Moonjumper's only known written lines.

The original logo for the Subcon Forest [1], showing the Moonjumper on the moon, as well as Tim's Friend.

Art by Shane Frost depicting a Humanoid Moonjumper. Multiple humanoid figures resembling The Snatcher, as well as a faded snatcher in the background, are depicted. 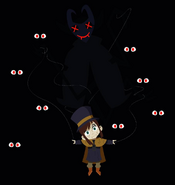 Art by Shane Frost depicting an alternative design for the Moonjumper. Note the horned mask, stripes to the sides of the eyes and beneath the mouth, and large cloak.

The Moonjumper after being spawned ingame in the first full release. Note that the Pixel effect around the Moonjumper is now black with colored outlines instead of colored with black outlines.

Another Moonjumper spawned in using commands, this time in Queen Vanessa's Manor. Note that as of the Modding Tools update, most NPCs are no longer spawnable using console commands.

A Beta Screenshot of the Subcon Forest, showcasing the same black pixels that outline the Moonjumper in the final release of the game.

Retrieved from "https://ahatintime.fandom.com/wiki/Moon_Jumper?oldid=18942"
Community content is available under CC-BY-SA unless otherwise noted.