Battle of the Birds
Mafia Town is both the first chapter and first location visited in A Hat In Time. The city was taken over by the Mafia and converted into a host for their Seafood Restaurant. Dominating the mafia skyline is the Mafia's Headquarters, built on the giant geyser in the center of the island.

Not much is known about Mafia Town, other than it used to be a regular island before the Mafia of Cooks settled in. The only known characters who inhabited the location back then are the Coffee Clerk and Mustache Girl.

No one seems to remember how the town was before the Mafia came, evidenced by talking to a Mafia Goon near the main plaza who claims to have been there for a thousand years. It is possible this dialogue was simply carried over from the original script, where the Mafia Boss also claimed to have not seen a Time Piece in over a hundred years.

In addition to having a different name, Mafia Town used to look very different. Once the Mafia of Cooks arrived, however, they fired the old inhabitants out with cannons and made several changes to the place.

Mafia Town is divided into 4 quarter areas, each separated by a water stream. The Eastern quarter area houses the town port, the North-West area has a small beach and the South-West area contains the main plaza.

The main plaza is the place where Hat Kid discovers her trusty umbrella after crash-landing in Mafia Town. Three shops are found here, these shops being the "Juice Bar?", "Spicy Burn" and "Bloomin' Idiots".

The beach features a variable shift in music to a more coastal version of Mafia Town's main theme. In the alpha build, it was also the home of a Time Piece, won by completing the Balloon Race in Mafia Town act. There's also an entrance to the cave under Mafia Town, but it's blocked by two mafia guards.

The location of Seaside Spaghetti, and the lighthouse. The black market can also be found here, although the entrance is blocked by the mafia. Most Mafia Goons in this area wear sailor hats.

In the center of the island, under the ground, a large cavern surrounds the island's geyser. There are four entrances to the cavern, guarded by goons on the boss's orders. Three of these entrances are on brick roads, and one can be found on the beach. Three of the entrances, including the beach one, have cannons that will shoot tourists through the central cave to the other side of the island. The cavern has some luminescent crystals, some mine cart tracks, and of course the geyser spout.

The Mafia HQ is where the leader of the Mafia holds residence, and is built on top of the jet of a continuously spewing giant geyser. How they managed to do this is a trade secret. The only two ways to get there are by cannon or hot air balloon, the latter of which is exclusive to Mafia members. Upon arrival, two buttons must be pressed simultaneously to open the door.

The main doors open into a restaurant, which is full of roulette tables and slot machines. The slot machines take gems, but they do not work. The Mafia who hang out in this area are very exclusive, and don't take kindly to intruders.

On the side opposite the entrance, there is a bar, and behind that is the kitchen where the Mafia cooks their food. But unbeknownst to them, Cooking Cat lives in the rafters, where she prepares real food and switches it with the Mafia-prepared garbage, which she is pretty sure would poison anyone who actually ate it.

Next to the bar, the entrance to the theater is guarded by a goon, ready to deny entrance to anyone not of the Mafia. This is also where the Mafia boss makes his home. Here, he personally makes an example of the worst of troublemakers in front of a live audience, in what he calls "true Mafia style."

Each chapter in A Hat in Time works differently from all the others. For Mafia Town all of the acts are unlocked in linear progression, with different events happening depending on which act is selected. However the map is an open world, allowing for exploration in each act.

Note: There are 12 Relics in the game, and when all of them have been collected, all other treasures listed as "Relic" will give a Rift Token instead. 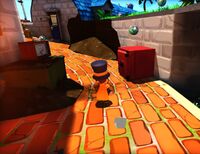 The Red Vault is near the beginning of Act 1. Walk straight down the path and it will be on the right.

The Blue Vault is near the town square at the end of Act 1. 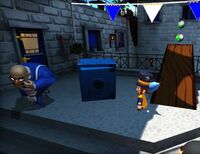 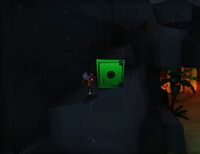 The green vault is on some rocks near the beach. It's below the bazaar.

Only appearing in Act 7, the gold vault is perched on top of the central tower.

A Series of Unfortunate Accidents

One of the Achievements requires Hat Kid to go around Mafia Town and knock off all the sitting Mafia. Here are their locations.

Below is the list of achievements related to this chapter;