Subcon Forest (cut)
Light Plants, sometimes styled as "lightplants," are a cut enemy type that would have appeared in Subcon Forest. In the Alpha of the game, they can be found in the Rift behind the bookcase in Queen Vanessa's Manor. In the Beta, they can be seen in the Beta Hero's Challenge. They can also be seen in the 2013 Subcon Trailer on top of houses in the Subcon Village and in other various parts of the forest.

The Light Plants appear to be large, white flowers with black dots on their heads. Upon eating a fly and charging up, a Light Plant's head will glow a color, chosen randomly between Yellow, Purple, Red, Green, and Blue. In the editor for the final game, the Light Plant's model is slightly different and uses a completely different texture, appearing with a purple head with a pink inner mouth and spikes coming out from where its stem and head meet. Its jaw is also slightly more extended than its Alpha and Beta equivalents.

When in combat, Light Plants have several forms of attack. When Hat Kid approaches a Light Plant, it can attack by biting or by laying flat and performing a spin attack. If the player were to distance themselves from the Light Plant, but not far enough for it to lose sight of them, it can use a projectile attack, which would be signified by it eating a fly and glowing. The Light Plant can then shoot a glowing energy ball at the player.

Light plants are theorized to have been removed due to a bug where in which they will fail to damage the player even upon landing an attack if the player stands still. This bug is most noticeable in the Beta, where Light Plants are the most dysfunctional. The Light Plants were also replaced in the Beta of the game's development with Pink and Yellow plant enemies, both of which can be seen on a number of official screenshots, including some that are included on A Hat in Time's Steam page.

A Light Plant in the editor. Note that this one is purple in color as opposed to the white that's seen in most footage and gameplay.

A Light Plant in the Alpha 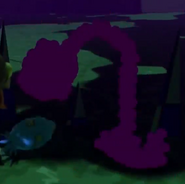 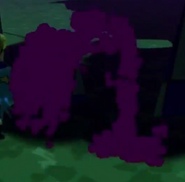