Hat Kid's Spaceship, otherwise known as Spaceship (Mk. 14 Custom), is a custom spaceship made by Hat Kid, and serves as the main hub of A Hat In Time. The ship uses Time Pieces as fuel, and requires them to power the doors, and to move the spaceship. The spaceship is halfway to Hat Kid's home when a Mafia Goon tries to collect a toll from her after thinking it is a "Flying boat". Hat Kid refuses to pay, and the Mafia member trashes the place, spilling Hat Kid's time pieces out onto the planet below.

Some of the characters Hat Kid meets on her adventures will visit the ship. Hat Kid can bring back relics as souvenirs from her travels.

The ship can best be described as a flying house. It is made of Space-resistant wood paneling around a metal skeleton, and comet proof glass for windows (that has a weakness of fists). The ship also has 4 boosters at the aft of the ship, with further reinforcements along the joints, and a full range satellite for communication.

The interior of the ship is a large and comfortable home. Some rooms are adjacent and connected by normal doors, while others are connected by neon-lit service tunnels. The ship is managed by an on-board computer system, presumably making it a contemporary "smart house".

When Hat Kid loses her collection of Time Pieces at the beginning of the game, the ship goes offline and the doors to the rooms on her spaceship are shut. The rooms can only be entered when a certain number of Time Pieces have been retrieved. Each room allows entry to a different chapter by a telescope. Later, when Hat Kid has the Ice Hat, she will be able to enter the mail room from the slide. Inside is a Time Rift.

The main room. Contains the Time Piece Vault, a TV, and 2 stands for Relics (50 & 100 Pons to restore). Rumbi patrols the room. There are several terminals for the ship's computer, including a pilot's chair with flight controls attached to the room's bay window and a TV that shows the title screen for some dog-themed video game. There are also monitors that display the current number of Time Pieces, Pons, and Relics earned, a terminal that can show the location of "anomalies" (rare stickers) with the Nyakuza Metro DLC, a terminal for managing Online Parties (also with the DLC) and a Rift Token machine. It has entrances to the Kitchen, Machine Room, Bedroom, and Engine Room via Time-Piece-locked doors, the Mailroom via a slide that can only be accessed with the Ice Cap, and the Attic via a Time-Piece-locked elevator.

This room is the entryway to Chapter 1: Mafia Town. It is comprised of a small kitchen-like room with a glass roof. After the Mafia Boss is taken down in Act 4, Cooking Cat will appear in here after her spiel on Relics.

This room is the entryway to Chapter 2: Battle of the Birds. It is comprised of various machinery that looks similar to the machines found on the sets and Owl Express. The window is a plain, rounded bar, similar to the Bedroom and Engine Room. There is a computer that can be accessed for small diversions. After obtaining your first remix, a band made up of Express Owls will appear here to switch out remixed tracks or play a random song. Later, what remains of the Mafia Boss will appear and sell you the Relic Hunter Badge. The entrance to the Gallery is also here, blocked off by barrels requiring the Brewing Hat to destroy them.

This room can be accessed from the Machine Room after getting the Brewing Hat to destroy the barrels blocking the door. In here are several paintings that Hat Kid has collected. There is also a Time Rift here, as well as a Relic Pedestal (150 Pons to restore).

This room is the entryway to Chapter 3: Subcon Forest. It is comprised of a bed, a desk, a dresser and a mountain of pillows. This is the first area Hat Kid sees in the game, although when it is re-entered (by recovering enough Time Pieces), it has a telescope allowing entry to Chapter 3. There is also a secret room under the mountain of pillows you can enter by jumping into it with the Ice Hat, where you can read Hat Kid's secret diary. The window is a plain, round bar, similar to the Machine Room and Engine Room. If you wait in this room for about 25 minutes, a creepy noise plays for about 7 seconds. With the Seal the Deal DLC, after obtaining 27 Time Pieces (including the one from Your Contract has Expired), the Snatcher will appear here, serving as a way to open the Death Wish map.

This room is the entryway to Chapter 4: Alpine Skyline. It has various meters and gauges, as well as snow lying around. It also holds the Dirty Laundry Cleaner 3000, which is the entrance to the Laundry Room, and by extension, the Arctic Cruise (only with the Seal the Deal DLC); additionally, the entrance to the Science Lab (and, by extension, the Storage Room with Nyakuza Metro) is located here. The window is a plain, round bar, similar to the Machine Room and Bedroom.

This room is the entryway to Chapter 5: Time's End. It has a Dweller Purple wall, Ice Pad, and a Caution Tape Box with buttons either in or above them. Pressing them all allows you to enter the level. The only way to press all the buttons is if you have the Brewing Hat, Ice Hat, and Dweller Mask. The window is very plain, but has an ominous yellow glow, foreshadowing the events of the final act, The Finale. With the Seal The Deal DLC, after obtaining every other Time Piece, a Time Rift will appear here.

Using the camera badge to enter into a mouse hole on the right side of the staircase that the telescope sits on top of will reveal a cobweb-filled tunnel which leads into a small crawlspace containing the golden castle and final resting place of the Roach King, complete with several written messages to the player and other various trinkets.

Only appears with the Seal the Deal DLC. Contains the entry to Arctic Cruise (Chapter 6). The entrance to the laundry can be found in the room before the Engine Room, where the door to the Science Lab is. This room is inspired by the Laundry Room on the S.S. Literally Can't Sink, but features other things not found on the ship, like Hat Kid's Detective and Parade Hats from Battle of the Birds. The window that the telescope looks through is shaped like a porthole crossed with a ship's wheel. Has a Relic Pedestal (300 Pons to restore).

Can be reached from the Room before the Engine Room. Requires the Dweller Mask. Contains a Time Rift. This room also holds the entrance to the Storage Room—and, thus, the Nyakuza Metro—and a stand for relics (200 Pons to restore).

Can be reached by using the Ice Hat in the Living Room to jump up the slide. Here, Goofy Mafia will appear to offer access to user-created levels, but only on the Steam version. The fan used to complete the "Fan-Tastic" achievement can be found here.

Only appears with the Nyakuza Metro DLC. Contains the entry to Nyakuza Metro (Chapter 7). The entrance to the Storage Room can be found in the Science Lab through a Manhole that requires the Ice Hat to access. The room is themed around a platform in the metro, with giant cat flaps where the trains come out of, and a section of track. Furthermore, the giant cat-pulled trains appear outside the window, and money piles under the telescope with each collected Time Piece. Has a stand for relics (250 Pons to restore).

Below is the list of achievements related to this area.

These are paintings found in the gallery on Hat Kid's ship. 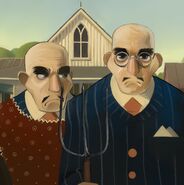 Add a photo to this gallery

Retrieved from "https://ahatintime.fandom.com/wiki/Hat_Kid%27s_Spaceship?oldid=19155"
Community content is available under CC-BY-SA unless otherwise noted.