A Hat in Time Wiki
Register
Don't have an account?
Sign In
Advertisement
in: Characters, Playable characters, Female characters
English

A Hat in Time
Tunche

Hat Kid, the main protagonist of A Hat in Time, is a human-like alien attempting to collect the scattered Time Pieces, the fuel for her spaceship, so she can return home. She is also the first playable character, the other being Bow Kid for co-op mode.

Her real name is unknown, as it's never mentioned in-game, and in the instruction manual, she is listed as "Me," due to it being written entirely in first-person. She also handwrites her name in Korean-like symbols when she signs The Snatcher's contracts. Some Girl is how she's described in chapter 2's image, also used when crediting her character Detective Useless.

In all respects, Hat Kid looks like a small human child. The only possible difference between her alien species and normal humans is the presence of bones in her ponytail when the C.A.W Agents take an X-ray photograph of her. While not officially canon, speculation (using the meters shown in the food level from the “Seal the Deal” DLC) says her possible height could be 2’3. She has brown hair and blue eyes. She wears a big, purple shirt with a bright yellow cape sporting a large zipper, as well as white pants and brown boots. She also wears a variety of hats, her favorite of which is a big, purple top hat with a yellow stripe, also known as the "Kid's Hat".

Hat Kid is shown to have an energetic and childlike personality. This is mainly shown through the innocent nature of her voice lines and idle animations. She is also shown to be rather mischievous, especially with the Mafia, such as when she knocks Mafia Goons off of ledges in Mafia Town, or when she burned paintings containing the souls of trapped individuals in a fire in order to help a group of Fire Spirits commit suicide in Subcon Forest. Despite this, she is also rather friendly, as shown during Your Contract has Expired in Subcon Forest, when Hat Kid attempts to befriend The Snatcher. However, it is also revealed via her diary that she only defaces Snatcher's contract asking to be his "friend" to spite him, adding to the sassy and sarcastic part of her nature. Her sass is also shown in plenty of flavor text throughout the game. She can be shy at times, such as when Mustache Girl asks for her name, or during her idle animation where she stops playing with dolls because she thinks someone might be watching. In contrast, she is very frank and emotive in her diary entries, calling out many people and situations on her adventure as weird or unpleasant. In fact, she is shown to be irritated and upset by most of the things she encounters during her journey, especially in Subcon Forest and Mafia Town.

While Hat Kid's move pool is relatively small compared to other platforming games, it is a highly versatile one that allows her to chain together many moves and reach most areas with relative ease and style!

If pressing the crawl button (usually Ctrl) while she's stationary, she gets into a crawling position and can enter through small tunnels.

By pressing the jump button (usually space bar), Hat Kid will jump into the air. Pressing it again while airborne will perform a second jump. While this is a basic ability in most platformers, jumping and double jumping is the foundation to Hat Kid's impressive platforming skills.

By pressing the dive button (usually Ctrl while she is moving) Hat Kid will dive in the direction she's facing. This briefly increases her speed and can be performed both on the ground and in the air. While diving, Hat Kid can change her direction very slowly. Dives can be canceled simply by jumping, which reverts her back to her walking speed.

Diving in the air will briefly slow Hat Kid's vertical speed and lunge her in the direction she faces, giving her more movement horizontally. Jumping to cancel a midair dive also briefly slows her vertical speed. This allows the player to control Hat Kid in the air on a wider horizontal plane and allows her to land more precisely on targets.

By jumping towards a wall, Hat Kid will start to run up it, gaining some vertical distance. She can then jump off of it onto a platform or another wall, where she can gain some more height and jump again. If the walls are parallel, this can be repeated to gain as much height as possible. Hat Kid cannot run or jump off the same wall twice in a row. She must jump off of another wall or touch the ground to jump off of that wall again.

If Hat Kid performs a dive and hits a wall, she will bonk her head and fall to the ground. However, if the player has the "No Bonk" badge equipped or cancels the dive before hitting the wall, she will start a wall run instead.

If Hat Kid does a double jump onto a wall, she will wall climb higher than if she does a single jump.

Press the melee button to perform a melee attack. At the start of the game, Hat Kid will be unarmed, and hitting anything will cause her to hurt her hand and flinch in pain. This also does no damage. Fortunately, during the first act in Mafia Town, Hat Kid will acquire an umbrella as her primary weapon. Hat Kid can string together a maximum of 3 swings with the umbrella at once, with a brief waiting period until she can swing again.

When airborne above enemies, a button prompt will appear over their heads to let the player know that Hat Kid can perform a homing attack. This allows her to quickly launch herself at the enemy to deal damage and bounce off of them. This is useful for both combat and platforming sections.

After the first act, Hat Kid will always have her trusty umbrella, which she can whack baddies with. It doesn't do much else, but with certain badges equipped, it becomes a very handy tool.

The default hat Hat Kid wears can guide her to the nearest timepiece or goal (although it is not always accurate). Throughout the course of her adventure, Hat Kid stitches together other hats which give her several abilities:

Excluding the Sprint Hat, all of these abilities will need time to recharge after being used.

Hat Kid can find several badges on her quest that give her unique secondary abilities, such as saving herself from a great fall or lowering the recharge time on hat abilities. Most badges can be bought from the aptly named Badge Seller, but there are some special badges that must be found in the various worlds.

During each act, Hat Kid can collect Rift Tokens. These are used to unlock either new aesthetic designs for her hats, new color palettes for her clothing and certain hats, and new remixes of songs for the different acts. Rift Tokens can be spent at the end of each act that you collect them in, or at the Token Machine in Hat Kid's Spaceship. 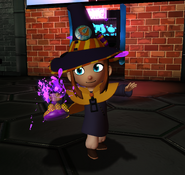 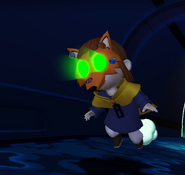 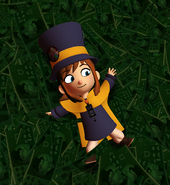 Hat Kid making a snow angel in a pile of money.