The Harbor was an early concept for Chapter 1 and was one of the first levels created for A Hat in Time. It's name and design changed throughout A Hat in Time's development. Its name is used to refer to the era of development where in which it existed. It was later succeeded by The City of Calcite and Adventure, which later became Mafia Town.

The following is an early story concept found on Mekucube's old website, MechatheSlag.net:

"A Hat in Time is a hack-n-slash action adventure game. It focuses around ‘Hat Kid’, a time travelling solo who crash lands on a new strange planet. The planet is cursed by the presence of the evil ‘Moustache Girl’, who uses her similar time travelling abilities to mess everything up! It is now Hat Kid’s duty to stop Moustache Girl from ruining the lives of the planet citizens, using her wits and her trusty time travelling umbrella."

Uncolored, first design for what became The Harbor.

The following is an early gameplay concept for "Time Branching", found on MechatheSlag.net:

"The game features a unique time branching mechanism: while progressing in the game, the game will allow the player to discover multiple alternative storyline routes. However, some routes require weapons or items existing in other routes that wouldn’t be available otherwise: time travelling allows Hat Kid to rewind time and grab all the stuff she needs, then go back to where she needs them. Think of it as a tree with branches."

The level itself is rather small, as it was initially used simply as a test map for new gameplay elements. The most noteworthy features of The Harbor were its clocktower, which was used in a modified state in the alpha and beta releases of the game, the water tower, the bazaar, which was mentioned and blocked out in the level's first pass, and its 3 buildings. The Harbor's map, although sparse in content, does feature the following building concepts that were used in the final game:

At one point Seaside Spaghetti was known as Café Manifique, featuring an unused detective NPC only seen in concept art. The detective uses a placeholder model of Mustache Girl. In addition to this, many assets found on this level were used in the final game, including the bridge, ladder, bell structure, and balloons. 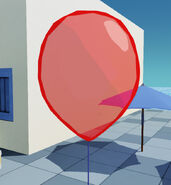 Hat Kid, looking a lot like Toon Link, walking around in Harbor.

Ditto. But standing next to Early Mustache Girl

The Ruthless Detective rambling about Pasta

Hat Kid, in her Final design, standing in a Nighttime Harbor

Harbor being turned into the City of Calcite and Adventure in late 2012
Community content is available under CC-BY-SA unless otherwise noted.
Advertisement