Goofy Mafia is a unique, peaceful Mafia Goon that appears in the acts She Came from Outerspace and Heating Up Mafia Town. Later he serves as a way to access Mod Levels inside Hat Kid's Spaceship.

The Goofy Mafia's overall appearance is similar to that of a standard Mafia Goon, with a large build, balding head, a thick mustache and the Mafia's signature blue suit.

However, his clothing is fairly different. His suit is ripped on one shoulder, and it is also unbuttoned, revealing an orange, plaid shirt beneath it. His shoes are white, and he wears a red and white striped bow-tie. He is the only Mafia Goon to wear glasses.

Despite only appearing in two acts before settling in Hat Kid's Spaceship, the Goofy Mafia's role differs greatly in each of his appearances.

She Came from Outerspace

In the act "She Came from Outerspace", the Goofy Mafia makes his debut appearance, where he serves as the goal for the mission. After he is startled by Hat Kid covered in mud, believing her to be a "slimy space alien", he leaps across various gaps, finally arriving at a platform held aloft by a hot air balloon. When Hat Kid reaches him, he offers her his Time Piece in exchange for leaving him alone.

In the act "Heating up Mafia Town", the Goofy Mafia's main purpose is to inform the player of the situation currently plaguing Mafia Town, that being that the town is flooded with lava. At the end of the act, he appears at the party up at Mafia HQ, complimenting Hat Kid on a job well done.

The Goofy Mafia appears on Hat Kid's Spaceship in the Mailroom. Speaking to him brings up a menu that allows the player to select a Mod Level to play. The Goofy Mafia only appears here if you are on the Steam version (PC). He is replaced with a time rift on the console versions. 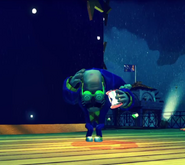 The text when talking to Goofy Mafia without being covered in mud.

Goofy Mafia pleading for a muddy Hat Kid to leave him be.
Add a photo to this gallery

Retrieved from "https://ahatintime.fandom.com/wiki/Goofy_Mafia?oldid=19041"
Community content is available under CC-BY-SA unless otherwise noted.