A Hat in Time Wiki
Register
Don't have an account?
Sign In
Advertisement
in: Death Wish, DLC
English

38 (although, these are challenges not "acts")

No. of Time Pieces Needed

27 (must include Your Contract has Expired)

Your Contract has Expired

Death Wish mode is a challenge mode that is added with the Seal the Deal DLC which has released on September 13th, 2018. It features 111 hard-as-peck challenges (114 with the Nyakuza Metro (DLC)) and give many different customization rewards, including newly introduced outfits.

Snatcher has a list of 111 (114 with the Nyakuza Metro (DLC)) challenges for Hat Kid to take on. At first only one will be available, but more will unlock as you complete more challenges.

To Unlock Death Wish mode you must obtain 27 different Time Pieces; One of those 27 MUST be Your Contract has Expired.

Each challenge has three objectives, the main one and two bonus goals. For each one you beat you get a Death Wish Token.

Some challenges will have a silhouette in the left corner, indicating that there is a reward for beating it. To get the reward you only have to beat the main challenge, and do not need to complete the bonus challenges. To collect the reward talk to the Snatcher again and select the completed mission on the Death Wish list.

If Hat Kid completes all 111/114 Death Wishes, Snatcher will then be in complete shock and holds a grudge that Hat Kid is still alive. Believing that she'll bother him. Snatcher will then realize that he or anybody can't always get what they want. Hat Kid will ask for an award and Snatcher will tell her that she did have the feeling that she achieved something and she earned it.

Unlike the other challenges, these goals are for completing outside of Death Wish. They still count towards the Death Wish challenge total.

* Camera Tourist is not available in the Switch version, bringing down the total amount of stamps to 108 (111 with Nyakuza Metro (DLC))

Below is the list of achievements related to this mode;

A Teaser image for the Death Wish mode

The Snatcher in Hat Kid's room

An image of the map, taken from the trailer. 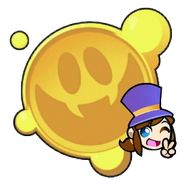 A stamp after completing a challenge in Peace and Tranquility mode.