unnamed lava level (cut)
Blob Marley was an Enemy cut from A Hat in Time early in its development. The only information concerning it comes from the one image that it's seen in and some mentions of it between 2012 and 2017.

Blob Marley appears as a yellow/light-brown blob with dreadlocks wearing sunglasses and a green, light green, and black rasta beanie. It has a long, wide mouth that extends all the way to its fourth dreadlock on the side of its head. It appears to be about the same height as Hat Kid's early 2012 design, being a little bit taller than Hat Kid herself, but slightly dwarfed by Hat Kid wearing her hat.

In the only known screenshot, Blob Marley can be seen shooting fire from its sunglasses towards Hat Kid, suggesting that it was a hostile character. The fire appears to extend around two meters from its face, although it is unknown whether or not the flames were at their maximum in the screenshot when it was taken.

Blob Marley was cut incredibly early on in A Hat in Time's development, prior to the Harbor version of the game. It is likely that its enemy concept was only used for prototyping, or that it was decided early on that the design did not fit with A Hat in Time's style.

A scene of Blob Marley attacking Hat Kid in an unknown level. 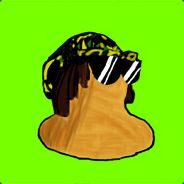 A picture of Blob Marley, circa some time before September 6th 2012.