Companion
The Bird Companion was a companion character and "best friend" of Hat Kid that was set to appear in A Hat in Time in 2013. It greatly resembles the unused hat_collectible_bird model with some differences.

The Bird Companion is a small, yellow bird with a singular feather sticking out on top of its head. It has two black dot eyes, and wears a purple cape on its back. It is relatively small, appearing to be about a fourth the size of its collectible counterpart. Its shading is much different to that of any other models, with all shaded areas being fully black. Its materials also lack any reflective properties, making it appear flat and somewhat comic book-like.

There is no particularly specific information as to how the Bird Companion would have worked alongside Hat Kid. It appears to either have flown alongside Hat Kid or perch itself on top of Hat Kid's Hat or shoulder. When spawned using commands in the alpha, it does not follow Hat Kid, and cannot be controlled with the "avatar" command.

Much like how it worked, it is unknown what the reason was behind its removal. Considering its simplistic class name (hat_companion,) it may have been replaced with Mustache Girl or a particular Mafia Goon, both of whom have also had companion classes that would follow Hat Kid around in earlier builds of the game, during development. 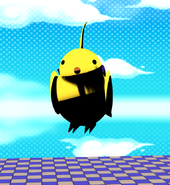 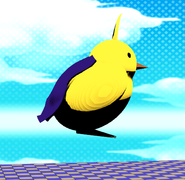 Ditto from the side, showcasing its purple cape. 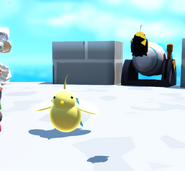 The Bird Companion seen alongside the collectible bird. Note the size difference. 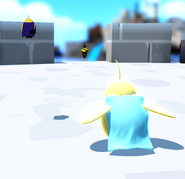 The Bird Companion as it appears in Alpha Update 5.