No. of Time Pieces Needed

Mafia Town
Battle of the Birds is the second chapter in A Hat in Time, where Hat Kid must help two birds, DJ Grooves and The Conductor, in making a movie to win the Annual Bird Movie Award. Acts 2 and 4 help The Conductor, and acts 3 and 5 help DJ Grooves.

Depending on which stages have the highest score, the finale will change the events of how the chapter ends, such as which bird is fought for the boss battle.

Unlike other chapters in the game, Battle of the Birds has several areas divided throughout the chapters, instead of a single, sprawling location. Locations include Dead Bird Studio, where the two directors make their movies, The Owl Express, a train owned and maintained by The Conductor, and the Moon Set, a small town where DJ Grooves shoots his movies.

The acts are very linear in comparison to other chapters, but also much more varied because of this.

Dead Bird Studio is the place where The Conductor and DJ Grooves make and produce their movies. Not much is known about the Dead Bird Studio or the world outside the studio. It is inhabited by birds only. The start of the studio comes from the dream The Conductor and DJ Grooves had as children to make a great movie after watching a show in television. They both worked hard to achieve their dream, but both were scammed to each having keys to the same building. However, it sparked competition between each other to make the best movies they can. Since then, The Conductor won all the Annual Bird Movie Awards in their competition except one, where DJ Grooves won Award 42. By the time Hat Kid comes by, the studio has met its 52nd year of movie production.

Dead Bird Studio has a few different areas in it. First, there's the front desk. It contains two passages leading to stages, trophy stands, and birds. The bird in the front desk will tell Hat Kid to not trespass these stages as movies are being filmed.

Past the front desk is the filming stages, which is the area that Hat Kid goes through in order to progress the act Dead Bird Studio. It contains DJ Grooves and The Conductor appearing in many different stages in order to make their next movies. It also has many birds on watch for trespassers, which if the Hat Kid gets caught in their field of vision for too long, she has to restart from the last checkpoint.

Finally, there is a hidden underground area in a place deep within and below the Dead Bird Studio, where, in the end, one of the movie directors appears as the final boss. It changes depending on who the boss is, being either a wild west stage wagon and saloon or rave party/dancing stage.

The Owl Express is the designated movie set used by The Conductor, taking place on a relatively straight railroad across a desert plain. Inside, the carts tend to vary in theme depending on the location and Act being played. Most are typical coaches that house passengers, comprised of red carpets and smooth walls, with others highlighting more fantastical aspects.

Murder on the Owl Express highlights the more traditional and mechanical aspects of the train carts, with the first half of the Act comprised mostly of well furbished rooms and the second with the more mechanical assets of the express itself, such as the Boiler Room.

Train Rush, on the opposite end, is mostly comprised of the exterior of the train, often due to the degradation of the interior rooms of the train as Saws come out to release complete segments out of the train itself. This serves as a great contrast to the internally confined rooms of the other express chapter, where only the beginning took place outside.

There are also internal segments which are comprised of vats containing green ooze typical for science-fiction, suggesting these segments could be a freight train compartment and one of the many assets reminiscent of Science Owls.

The Moon Set is the designated movie set used by DJ Grooves, taking place inside a lively city filled with many buildings, congested streets and sprawling telephone cables overhead. In contrast to The Owl Express, the set as its name suggests, takes place on the Moon rather than the planet itself.

Also, unlike the Owl Express, both Acts share a lot of thematic similarities between one another, taking place in the same city load-out with the presence of many Moon Penguins in the form of picture takers or small groups in Picture Perfect to large raving crowds that flood the street below in The Big Parade.

The major difference between these two acts is their goals and gimmicks that are utilized to reach the end of the level, with the need to explore a small free-roaming world for attention in Picture Perfect and the requirement to survive the many hazards on the top of the roofs in a survival-esque mission with The Big Parade.

Throughout Acts 2-5, the movies of the two directors will be judged based on Hat Kid's performance during each act. Events during the Finale and whether the player will have to fight The Conductor or DJ Grooves will change depending on who wins the award.

Here is a table to show how the scoring works;

Only The Conductor's acts grant bonuses to make up for their lower quantity of Icons, but it's still much harder to get high scores on those stages than on DJ Groove's.

When the player enters Act 6, it will confirm the winner of the awards, but before then, they can return to previous missions to increase the score of either director. If the directors are tied, it will select one at random upon playing Act 6.

While the first act is straight forward, the rest of the acts besides the finale each give ratings to the directors' movies. Depending on which director gets more points will determine how the finale plays out.

Act 2: Murder on the Owl Express

Below is the list of achievements related to this chapter; 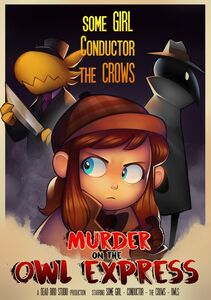 The poster for Murder on the Owl Express 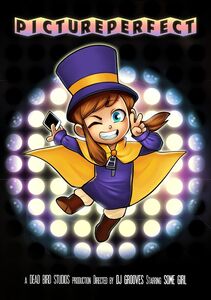 The poster for Picture Perfect 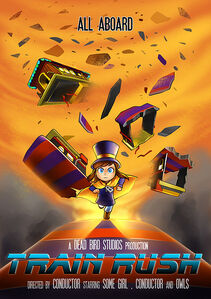 The poster for Train Rush 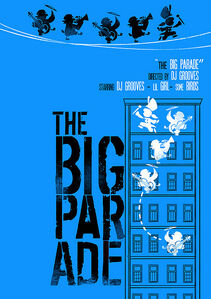 The poster for The Big Parade